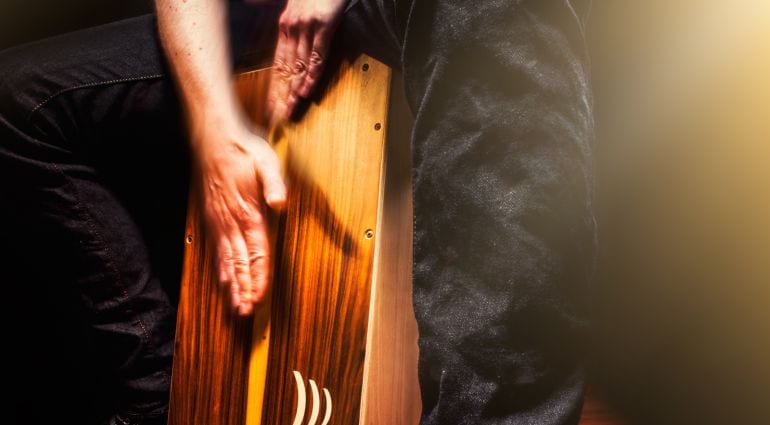 The flamenco cajón, also known as the Peruvian cajón, is one of the few instruments of its kind that has become a vital component of this vibrant musical genre. An interesting fact is the flamenco cajón didn’t appear until 1977, even though this is an old and long-lasting genre. Its predecessor came from Peru in the seventeenth century, built by the African slaves who came to the Americas with the Spanish colonizers. The slaves used the cajones to accompany songs that spoke out against their terrible conditions, so the conquistadors decided to ban and burn the instrument. Thus, this earliest cajón would become a symbol of the fight against colonial repression.

Flamenco genius Paco de Lucía discovered the instrument on a tour of South America during a concert held at the Spanish Embassy in Lima. There, he came across another concert by a famous Peruvian singer, Chabuca Granda. When Chabuca played the cajón, Paco became entirely entranced by its magical sound, which perfectly aligned with his own flamenco music. From then on, it would be the fifth essence of the genre, taking an irreplaceable role in flamenco music.

The cajón has evolved since its first foray into the world of flamenco. Strings have been added, and the method of anchoring the front cover has changed, allowing it to develop its very own personality. Now we even have small digital or electroacoustic cajones with a sound almost identical to the original. Mario Cortés cajones are currently among the highest quality on the market and have also evolved considerably over the years.

The evolution of flamenco music: The incorporation of Mario Cortés flamenco cajones

Malaga guitarist Mario Cortés began as a luthier almost by chance; he would never have dreamed the sound of his instrument would end up captivating flamenco percussionists from around the world. Through his experience as a musician and a craftsman, he values the relationship between the flamenco and Peruvian cajón. Over the years, the flamenco cajón has evolved to the demands of the musicians of the genre. It has also become an instrument for percussionists of other genres, such as jazz, as it can accompany any band in any room.

Mario Cortés had been forging a solid international career as a guitarist, playing alongside well-known professionals such as Manuela Carrasco, Carmen Cortés, Fernanda de Utrera Camarón, and José Menese. In 1993, he was rehearsing with his brother-in-law Gerardo Nunez, when his son asked him if he could make him a cajón. Mario agreed and gave him the money to buy all the materials he needed. The boy was excited about getting a new cajón. And even though Mario had never built one before; he produced a beautiful cajón with a magical sound. Then, when they saw it, Rubem Dantas and José Antonio Galicia asked Mario to make them one as well. Since then, he hasn’t stopped researching how to improve the quality of his cajones, taking a trial-and-error approach and incorporating Finnish oak wood. And, of course, he’s always meeting the expectations of even the finest flamenco musicians.

The tradition of sevillanas with castanets